Africa Goal is an exciting and innovative project which harnesses the popularity of the football World Cup to address HIV and AIDS in the region of the World most affected by the epidemic. By naturally drawing crowds of those most at risk of HIV infection who have proven the most challenging to reach through more conventional health promotion methods – young people and, particularly, men – the World Cup provides an invaluable opportunity to provide HIV services, raise awareness and disseminate information about HIV and AIDS.

Following the success of the 2006 and 2010 Africa Goal campaigns, the Africa Goal team will drive from Kenya to Swaziland, screening live World Cup matches on a big screen and harnessing the opportunity to provide HIV and AIDS information and services to the crowds that gather to see the games. Driving through eight African countries, the team’s journey follows the “AIDS Highway” through Eastern and Southern Africa, where increased mobility and migration in conjunction with rising disposable incomes and the associated escalation of transactional sex along this central transport and trade route were major contributors to the rapid spread of HIV through the region.

By showing live World Cup matches at border towns, truck stops, fishing villages and rural outposts along the route, the 2014 Africa Goal Project creates an ideal platform to reach some of the most at risk and hard to reach populations in the world with life saving information and services. Throughout the campaign, Africa Goal partners with community based organisations to ensure that content shared is both culturally appropriate and relevant to local contexts. In this way, Africa Goal takes on a facilitating role by drawing the audiences, whilst local service providers are supported to maximize the potential of the World Cup as a platform for HIV service provision.

A Passion for Football

There is an incredible sense of enthusiasm, excitement and passion surrounding football in Africa. People of all ages and backgrounds gather at the end of the day to cheer their local teams, the dust barely having a chance to settle on constantly in-use village football pitches; children run after homemade footballs on their way home from school, constructing balls out of whatever materials are at hand in order to play; bar, hotel and shop owner scour magazines and newspapers for pictures of celebrity footballers to adorn their walls and a crowd always gathers around whichever radio or television screen is airing a big match. No other sport has the capacity to draw as much attention in the region, and the World Cup is the ultimate spectacle.

Africa Goal events draw huge crowds, mostly of people aged between 15 and 49, correlating with the age sector most at risk of HIV infection. In addition, with the campaign being focused on East and Southern Africa – the region of the world most severely affected by HIV – Africa Goal creates an ideal opportunity to provide vital HIV interventions in the places, and for the people, where they have the greatest impact. 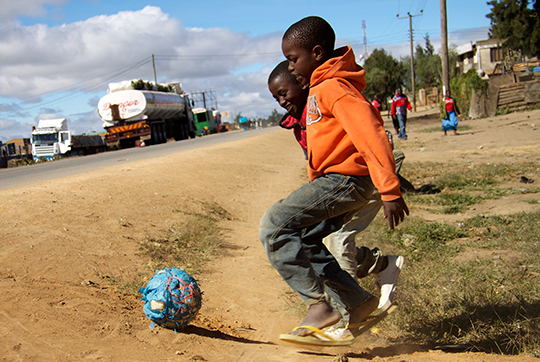 Africa Goal partners with local organisations in every one of the areas we visit. This maximises impact; ensures relevance and sustainability; and supports capacity strengthening. Our partners – local experts in HIV service provision – lead HIV activities and discussions before and after the football matches, focusing on the specific HIV related issues that are of highest priority to community needs and national strategic focus. Working with partners also enables mobilisation of participants ahead of the team’s arrival, ensuring maximum reach of the events. During the 2010 Campaign, turn-out at the events was consistently high and regularly exceeded the team’s expectations.

Key issues addressed through the activities include HIV prevention and treatment; the importance of knowing one’s status; prevention of mother to child transmission of HIV; gender based violence and inequality; stigma and discrimination; sexual diversity and sexual minorities; most at risk populations; and the promotion of active male engagement and participation in health and parenting issues.

Activities conducted commonly include a combination of the following: 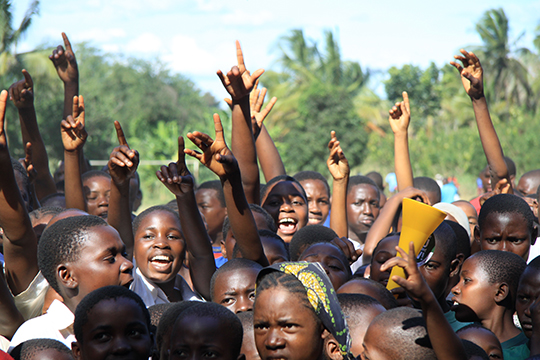 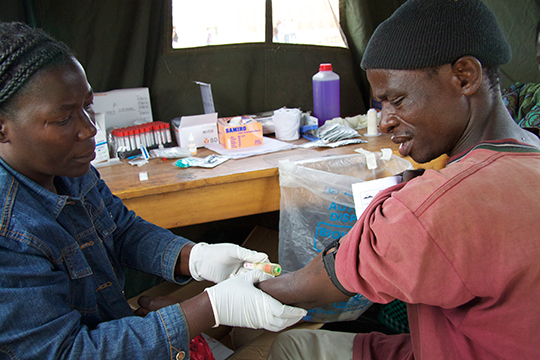 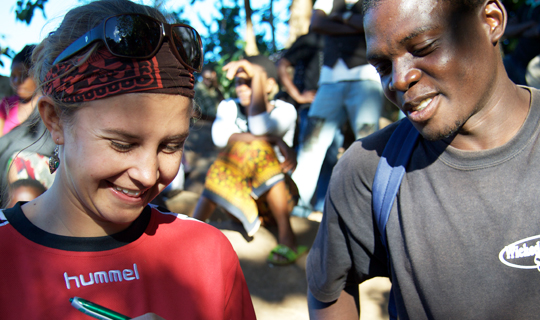 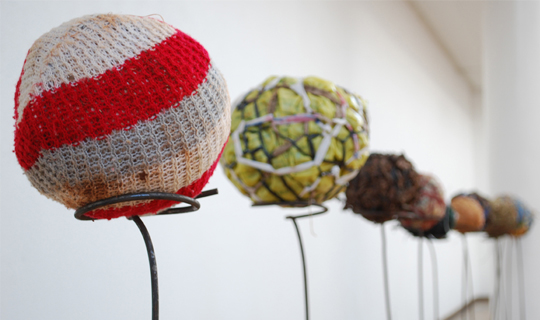 Documentation is a key component of the Africa Goal campaign. Africa Goal has held several exhibitions at galleries and venues in the USA, Kenya, Zimbabwe and South Africa, including an exhibition of photography and hand-crafted footballs (collected through our Trading Footballs initiative) from across Africa, at the Global Football Village during the 2010 World Cup final in Johannesburg, South Africa. The aim of the exhibitions is to showcase Africa’s love of the “beautiful game”, to share HIV information as well as to encourage artists to promote HIV awareness amongst their followers.

The Africa Goal team includes professional artists, photographers and new media specialists. Travelling with all our own equipment, the team will document – through still and moving images – the experience and individuality of each match day. In addition, portable media devices will allow for dynamic broadcasting of audience reactions to the matches, HIV activities and messages that our partners and audience members want to share with the world. The project blog and website newsfeed will be updated with photos, video and articles as the trip progresses, providing a portal for discussion and dialogue and promoting the ideology of Africa Goal – using media to harness the popularity of a great sporting event.

Click on the link below to find out more about the Africa Goal “Football Exchange” concept, and how you can get involved.

What is Football Trading?

Feedback from Partners and Audience Members

We have been very excited about preparing for the Africa Goal event. Baringo is often excluded from the HIV response as we are just a small village but the people here need information. There is a very high prevalence due to low employment, high rates of alcohol abuse and lots of concurrent partnerships but there is also very high stigma so people won’t even attend the clinic for testing. This is the first time that I have seen people taking testing seriously – we have had a huge impact.
Chief of Baringo DistrictBaringo, Kenya

To support improved HIV awareness and service provision amongst most at risk populations in East and Southern Africa, using the FIFA World Cup as an innovative and effective platform for engagement and empowerment.

We were very excited when we heard that you were coming to Mbita. We wanted to take advantage and ride on your back. We know the community loves football and we wanted to deliver them messages of prevention and management of HIV… a day like this one gives us the chance to tackle the reality on the ground and lessens stigma which leads to early detection. Many have been tested today, whilst others will go home think about it and come back to us.
District AIDS and STI Coordinator (DASCO)Mbita, Kenya

It was an amazing game… it was so close. Normally I would have listened to the game on the radio, or go to a TV bar in Salima. I have never seen so many people here, people have come from other villages. I really like the materials – they are fun and contain interesting information. I think it’s really good that we can talk about HIV with each other. Thank you for organising this!
David PiriAudience Member, Salima, Malawi